May 15, 2021
Nokia introduced a new group of Smartphone’s: the Nokia X series. The first three phones in the family-the Nokia X, X+ and XL.

Nokia introduced a new group of Smartphone’s: the Nokia X series. The first three phones in the family-the Nokia X, X+ and XL. These are run on the new Nokia X software platform, based on the Google’s Android.Nokia X series are not pure Android phones. These phones rather run a bifurcate variant of Android, which is similar to the way Amazon does for its Kindle Fire line-up. Nokia has taken some open-source elements from Windows Phone and Asha and give a little different experience to users.

But, the drawback here is, X users cannot have access to the Google Play Store. Though, the phone will run Android apps, but still Nokia will claric a list of such apps. Nokia X is based on the new platform namely Open Source Project (AOSP).

Nokia trenches many Google services that come with Android. Instead of that, the new Nokia announced, new Nokia X phone will emphasis Microsoft services such as Bing search, Skype communications and OneDrive file storage. It has some Windows phone features like larger home screen sports, resizable tiles.

Nokia X, Nokia X+ and Nokia XL form a new group of Nokia’s affordable Smartphone’s. The cost of Nokia X will 89 Euros and will be available shortly in selected markets. The Nokia X+ offers more memory and storage, priced at 99 Euros and will be available in early Q2 2014.Finally,the Nokia XL has 5-inch screen with 5 megapixel rear-facing and 2 megapixel front-facing camera. It will be also available in early Q2 2014 and the price will be 109 Euros.

These phones give a brand new tile-based Home screen, offer a simple elegant way to manage user’s apps, functions of phones and also reintroduces a redesigned version of the popular Fastlane notifications centre which allows a second Home screen as per user’s wish-from the latest Asha devices.

Offline amps also included while online Maps are available with turn-by-turn navigation. From Microsoft OneDrive with 7GB of space for free is included out of the boxas a free cloud sstorage. Outlook can also be accessed from Outlook.com as user’s email service. And also a month’s free international landlines call available in selected markets through Skype. 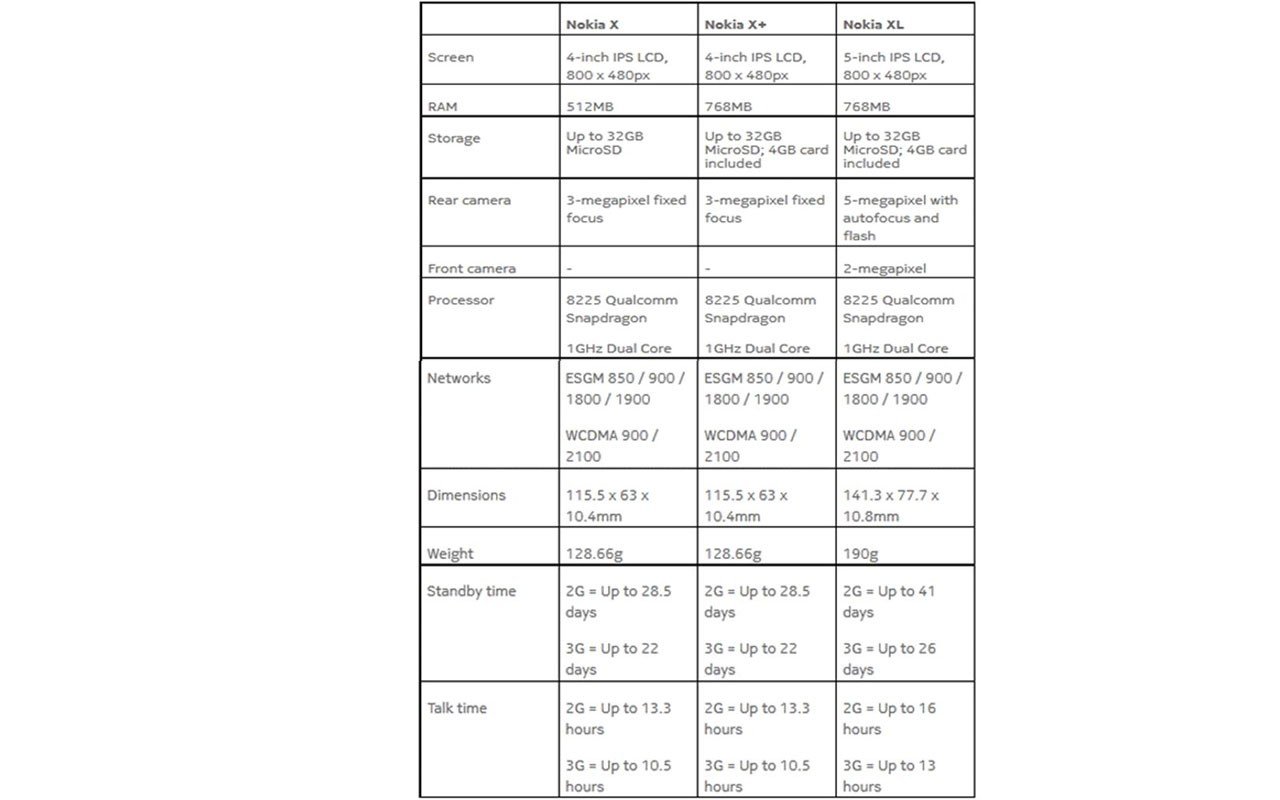